Just for something different I decided to try the RAW chocolate macaroons by One Lucky Duck. Now I am the BIGGEST chocolate freak and without a doubt these babies are delish and worth every penny. And for those naysayers you would never know this is a raw product. I would forgo by Green&Blacks for these yummies any day.
You can order them on their website - click here or in Boulder at Whole Foods. 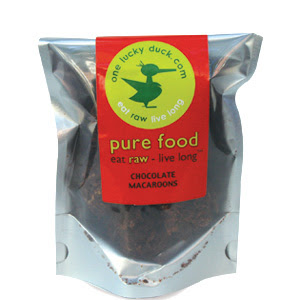 Even though I tend to be OCD about most everything I have to say I am loving these palapas (Popsicles)!!! Current fav is Mango!! 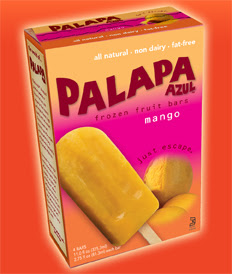 No added sugar no dairy just frozen fruit goodness in a bounty of great flavors. To see more click here 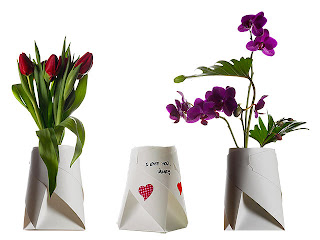 Noming Vases, made from a paper-based material, which is 51% chalk. The vases are 100% waterproof, can be reused and personalized. Click here to purchase

Too often we've heard the saying white is the new black, green is the new black, last season it was grey is the new black.
In Japan this summer black is back, so black is the new black?? Ping Mag reports about all the everyday and not so everyday items now be found in black; toilet paper (although I think this have been available in the US for sometime - click here for article), toothpaste, toothbrush....see below for pics.

It will be interesting to see if the US picks up on this Japanese craze... 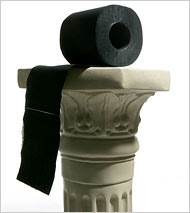 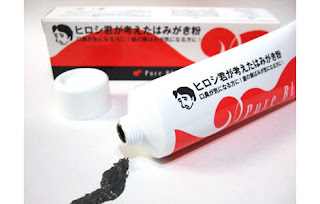 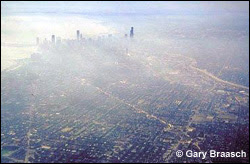 Get Your Elephant On... 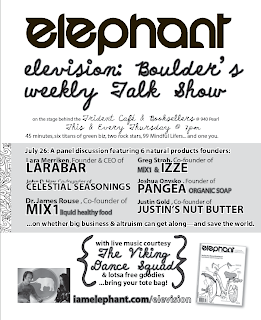 This Thursday Trident Patio 7p Check out this lineup!!
Learn stuff, get stuff and support our locals!
http://www.iamelephant.com/

To my new bag by Mary Jo Matsumoto - accessories designer and author of the fab blog Trustyourstyle.com. I was connected to Mary Jo from the super-hip Capo di Culture Mr. Plopculture - its just a lovefest all over the place...

The fabric is this amazingly soft patent leather and the color can't be beat!! See pics below for mine. Contact Mary Jo to pick up yours - 10% of proceeds go to UNICEF. 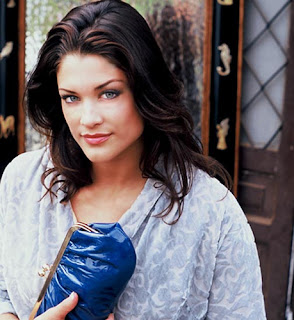 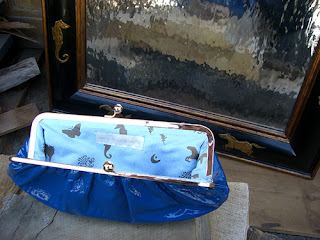 To continue on a previous post re: water, plastic bottle waste and the environmental impacts that happen before you even open the bottle.

I try to use my SIGG and water filter as much as possible but sometimes you just have to buy the bottle. Here in Boulder we have a predominant spring water company which will go unnamed. Those who know me will understand why I chose not to support.
NOW, I've discovered BIOTA, another CO based spring water company BUT they use biodegradable plastic for their bottles. So I can not only keep my $ away from unnamed company but can try to do my part to get one less plastic bottle out of landfills.
If you live in Boulder you can find BIOTA - at Wild Oats, Lucky's and Whole Foods.

If you don't than head to Mary Jo's Trustyourstyle blog immediately. She's got all your bases covered; spas, art, skin care, accessories, fashion. What more could a girl ask for? While you are there be sure to shop her store!

Swigg from a Sigg

One of the main reasons I purchased a Sigg stainless steel water bottle was to help do my part in cutting down on all the plastic water bottle waste but there's also a 'rumor' about plastic seeping into those water bottles/water you are drinking. Regardless, no matter how cool this reintroduced bottle is I am not going to purchase it!! It was originally developed in 1941 for the Swiss Army and Sigg, check it out.

Nytimes Sunday had an interesting article about plastic water bottles and the push some cities are making to drink the tap....click here for article

The world that is.
So my NBF (new best friend) MM has the best blog, Plopculture, click here if you know what's good for you!!!!!!!!!!!
Skip all the deets, a couple of years ago me my friend were cruising around AB blvd and met the crew (Rene& Gang) of this great shop - HydroLab - super friendly guys!! Turns out Rene and MM are tight - what are the chances???
Sad news is the shop is no longer but being the shopper that I am I did make purchases . If I haven't bored you by now here's some shots of my t, which I guess now is a collectors item - SWEET. Actually if memory serves me the logo is pre-hydrolab. 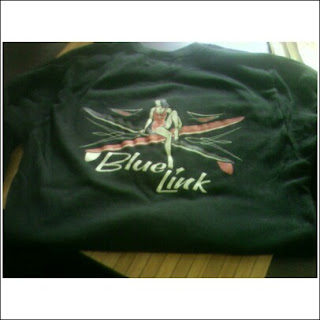 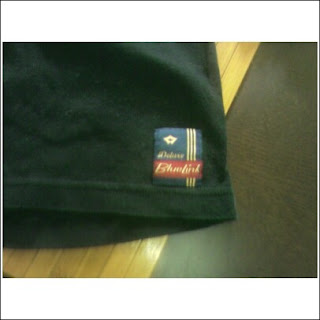 The Elephant summer ish is out!! If you haven't grabbed your copy or don't have any clue about Ele head to your nearest indie shop and grab my dear friend Way's publication. Triple digit issue, nicely done.
GO quick Way just had a bday and he's not getting any younger.... 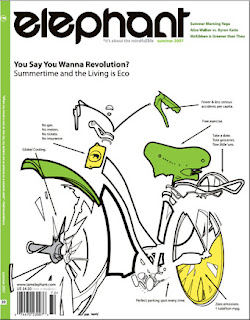 And not in a good way. It's another blistering hot day in the Boulder bub. There was a time when Boulder had a mild climate; jeans in the summer evenings, shorts in the winter. Now its evolved to Alaska snowfall averages (with the year total in a course of a week) and AZ-esque summers. This is a shot from my car about 1 hour post..Notice the crappy photo that was taken (when the car was stopped). 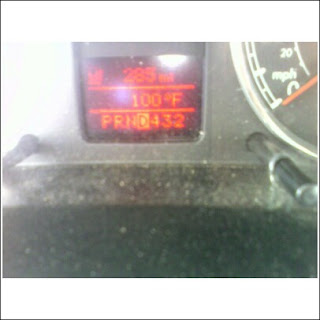 So for those who were interested in the Tour pre-Lance and still continue, from my German man on the streets, Sebastian....

A few hours ago: after the positive drug test of a Team Telekom cyclist, the German public TV stations, which are responsible for broadcasting the tour, have decided to pull the plug. The tour won't be broadcast on German TV any more, at least this year, due to all the drugs.

But LA managed to win, how many years, without a drop of the juice....WHATEVER 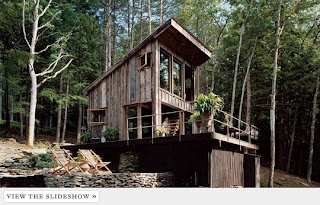 Check out the weekend eco-retreat of stylist Scott Newkirk. Click here for the article and be sure to watch the slide show.
Looks beautiful - I wonder how the cell coverage is out there?? JUST KIDDING!!!!

I am heading out to LA soon and one of the restaurants I was hoping to hit was Mozza (the Batali/Silverton joint venture).
That is until I came across this... 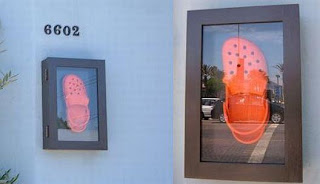 1. Since when does Croc signal an indicator of good taste or fine dining for that matter?

2. I get enough croc visuals here in Boulder it is necessary for me to be punished on vacation....

3. I guess I shouldn't be so harsh - Batali's belly is so big he can't really see whats on his feet anyways

Denim/jeans factories in Tehuacan, the heartland of Mexico's denim industry, are turning rivers blue with the chemicals used to dye jeans. Click here for full story.

Doesn't that make you want to buy organic denim the next time you plunk down $150+ for a pair of jeans???
Some suggestions:
Earnest Sewn (see pic below for new cut)
Del Forte
Kuyichi
Nudie
Loomstate 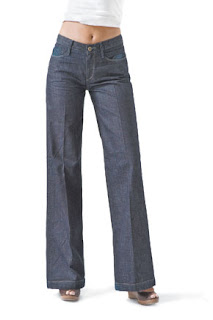 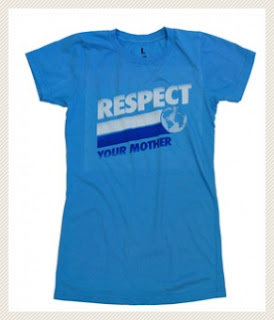 T-shirts LUV'em can't get enough of them!!
Now I find out Local Celebrity has teamed up with Global Green USA to create these righteous tees!!! Available for M's, W's and kiddies.
Hello, can you say guilt-free purchase....?

Wool from Corriedale sheep (raised in Maine), crafted on traditional looms and housed in an 18th century post-and-beam farmhouse, on a 17-acre farm, in Northport, Maine, it's no surprise these Swans Island blankets are so very beautiful. It's nice to know the wool is spun and cleaned locally with only biodegradable soaps and oil and dyed with natural materials such as; Osage Orange and the Indigo herb. Now, picture a cool summer nite New England tucked inside one of these goodies keeping you warm and cozy... 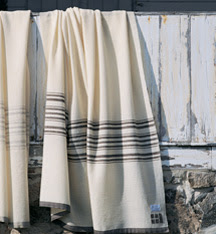 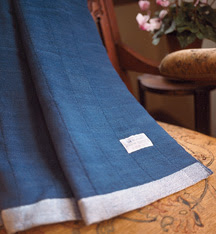 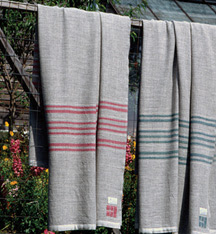 There is an article in the NYT on the rise of the 100 calorie snack pack. Click here for article. Two questions that immediately come to mind are- 1. why are people paying for this - can't they portion size on their own and 2. why are they ingesting crap like this in the first place?
In reality, how people want to spend their $ or what they choose to put in their bodies is their own choice. But after I read this article (click here) and starting thinking about all the excess packaging and additional trash this marketing ploy is creating I was irked. And want these consumers should stop wasting their $ and ingesting this crap...

Here's a great new site dedicated to ladies who care about all things green!!

WOW, it's defintely been awhile since I have uncovered anything that compelled me enough to post. Thanks to RWalker I now present Huge Magazine - 'A superchunky arts and leisure magazine.' The website includes Art Gone Bad, a thrift store art gallery and an Ask a Swami section for hours o'fun.

I am heavy on the visual side. I.e.- I am utterly lost unless I write down directions - no use listening on the phone. So, I dove right in when I discovered this online quiz. Click here to see for yourself. It's short & no registration required...try it!!

Via HopingforHappyAccidents I was turned on to these Eric Beauduin bags - for men and women. Not only are they gorgeous visually but he uses leather from second hand clothes, working with the profit association Les petits riens who collect the clothes for Eric. Brillant work Eric! 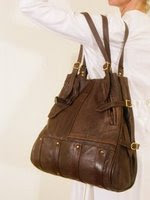 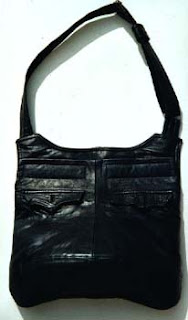 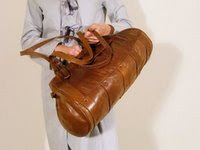 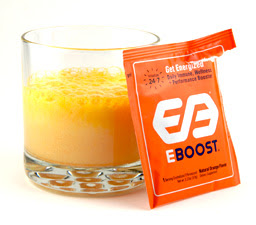 Since an earlier offer has since expired, enter Eboost30 upon checkout and get the 30%discount!! Eboost.com