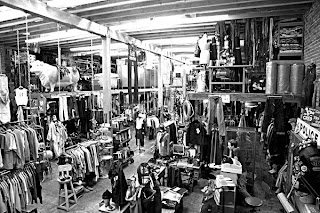 Well, now that Mister Freedom is hitting the masses with their JCrew colab I might as well share a little about the collection and shop. Mister Freedom has a MASSIVE space on Beverly Blvd. Standing outside you have no idea what lies inside, it's awesome! The MF collection and overall vintage collection of the shop is incredible. The prices aren't cheap but no more than They Way We Wore or similar shops....http://www.misterfreedom.com/ - check it out.

I will be traveling, working vacation, blah blah next week so the blog will likely follow suit. 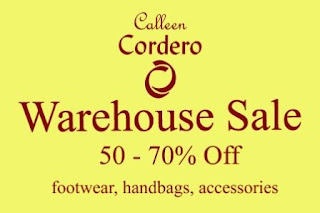 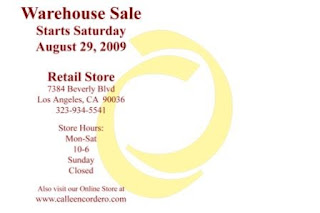 ughhh - I should really stay away but her stuff is so good and it lasts forever! www.calleencordero.com

I love when I learn about a great designer that happens to live in my backyard....such is the case with Kelly B Couture...a great collection of easy to wear pieces in luxurious eco-fabrics. Maybe because heading to the beach is on my brain, I was super excited to see her bikinis for 2010 ----sooo cute...its a few months before they hit the shelves. To restrain yourself between now and then consider this cute number - The Mandy Dress at http://www.greenwithglamour.com/ - and guess what - IT'S ON SALE almost half off!!!! And you know it would work, en route to the beach, or al fresco for some sunset cocktails - click here to read more about the Kelly B dress 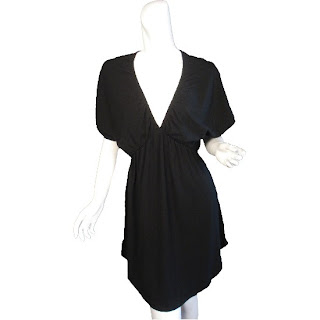 Hermes x Liberty - the only thing cooler would be using deadstock fabric or remants...plus then they would be super limited eds and they could charge the bigger $$$$$$$$$
Someone, please buy for moi??
Deets here - http://www.liberty.co.uk/fcp/content/hermes/contentform 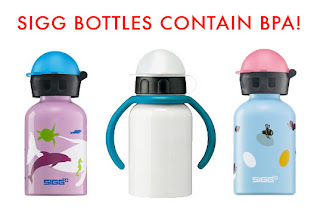 What's is the address to send back our bottles for reimbursement? Sounds like a recall if you ask me!!!!!
Via Inhabitat - SIGG contains BPA...click here to read entire article

Who doesn't need a little balance these days.... 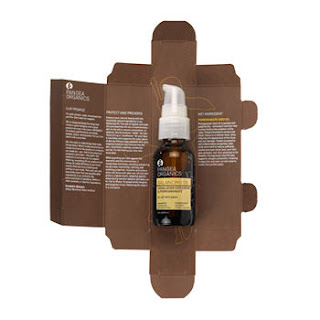 Right??? So why not give Pangea Organics Balancing Oil for your face and neck a try?? After a day outside a little oil followed by some Pangea eye cream is a must do! I can tell you my face was happy.

Check out the entire line at - http://www.pangeaorganics.com/ - readers....you know I am already a big fan of the lip balm! 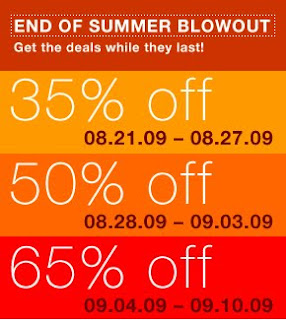 Check out - http://www.greenwithglamour.com/
It’s time for our HUGE SUMMER BLOWOUT* including TONS of Women’s & Men’s Clothing and Accessories marked down…
1st week – 35% OFF 2nd week – 50% OFF 3rd week – 65% OFF
Just make sure you get yours before it SELLS OUT!
Also, be sure to check out the GWG blog or Facebook for our 48 HR FLASH SALES every Monday, Wednesday & Friday.
One item + Deep Discount for 48 hours = Too Good to Pass Up! STARTING TODAY… the Stella top by Toggery (originally $65, see photo below) for only $29!!!

For me, the pairing of style + eco/green is what speaks to me. Sooooo, when I first found out Fahmina takes leather otherwise headed for the landfills to make fabulous bags, earrings, necklaces I was elated! Check her out - http://www.fahmina.com/
An important note - I carry a lot of weight in my hips so I was hesitant to try the fanny clutch. However, it is surprisingly slimming!

Another reason to love Z Cuisine

If you live in Colorado or plan on visiting Colorado, a meal @ Z Cuisine is highly recommended from moi....and now more so than ever - way to go Patrick~

I went to see The Cove movie last Sunday night — this is really big for me because my whole being wants to be involved so very deeply in this indifferent world we live in.
This is why I would like to call myself a Food Activist one day, but nothing will happen unless I take action and become available to that mission.

This is why I want to be part of this very important movie that concerns the protection of the entire food chain and the future of it.

In addition to the captivity and mass slaughtering of dolphins — which have become my symbol of the indignance, ignorance and greed of human behavior — I want to be a voice for all the messages that are not being heard enough: all the other movies out there being used as a vessel to intrigue, touch and reach as many souls as possible about our world, and how we can — how we should — live more harmoniously within it.

So lets start with that, I will buy 50 tickets to go see the movie at the STARZ Film Center
Come by Z Cuisine. Collect your tickets. And take part in your destiny. 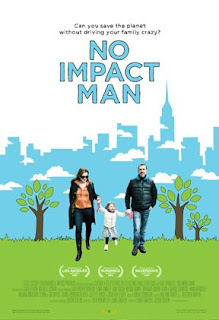 As you may or may not know, my last 48 hours have been quite stressful. My sweet dog contracted (if you can call it that) bloat and was rushed to ER, surgery, the whole gamut. Since he remained in the hospital last night, though coming home TODAY! I needed a distraction last night. I previously RSVP'd for a screening of the soon to be released documentary distributed by Oscillospcope Pictures, No Impact Man, at a sweet little screening room, tucked into a random building on Wilshire.
I first read about Colin in a NY Times article a few years ago, so I was intrigued. The film was well made and deeply chronicled the year project Colin, his wife (although reluctantly at times) and daughter undertake.
Here is Colin's blog if curious - http://noimpactman.typepad.com/ 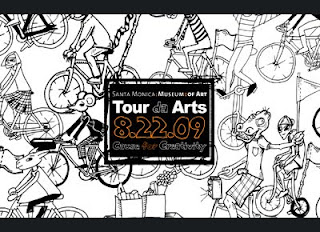 http://www.smmoa.org/index.php/news/pressroom_details/11
Cause for Creativity: Tour da Arts Saturday, August 22, 2009
Join SMMoA and C.I.C.L.E (Cyclists Inciting Change through Live Exchange) for a special art-making workshop and cultural bike tour that begins at the museum and loops through the city of Santa Monica. Enjoy special programming and tasty treats along the way! The bike ride is led by League Certified Cycling Instructors from C.I.C.L.E. and consists of an 8 mile loop throughout the city.
Beginning at SMMoA, the tour will make its first stop at The Broad Stage and continue on to the Miles Playhouse. From there, bikers will travel to the 18th Street Arts Center and then back to SMMoA. The bike tour will proceed at a slow, social pace and will obey all traffic laws. Participation in the bike tour is FREEWorkshop Registration: FREE for SMMoA members and $5 for non-members. Click here to Buy Workshop Tickets
What to Bring: A bicycle in good running order. All participants under 18 must wear a helmet and be escorted by a parent or guardian. Children under age 9 are recommended to be on a tag-along, bike trailer, tandem, or other safe child-carrying device.
Bike Rentals: SOLD OUT
___________________________________________
Join us for all or part of the day:
1-2pm: Registration Check-in for the workshop and see SMMoA exhibitions.
2-4pm: Workshop Make an original bike flag to wave your creativity to the world!
4-5pm: Bike Check-up Check-in for the bike ride. Get your tires checked, attach your new bike flag, enjoy snacks and drinks provided by Whole Foods, Cliff Bars, Y Water, and indulge in an ice cream sandwich by Coolhaus.
5-8pm: Bike TourC.I.C.L.E will lead a guided bike tour to some of Santa Monica’s most exciting arts venues, featuring live music, artist studio visits, and exhibition tours. 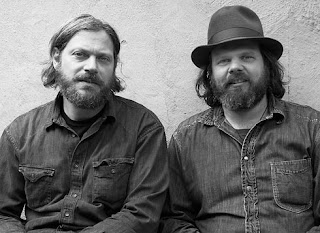 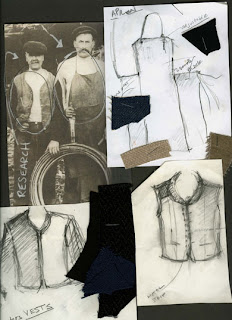 Fixate on a body lotion 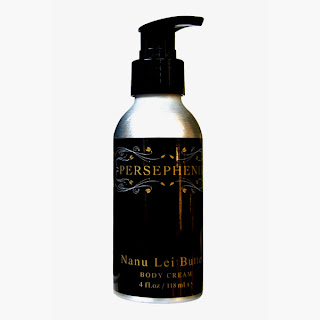 ....I am soo weird. I tried this lotion a few weeks ago AND could not stop thinking about it. Amazing texture, best scent AND organic! The whole product line is avaiable here www.blundaaromatics.com or her shop in West Hollywood
on a totally unrelated note....
Liseanne Frank, LFrank has the best candles hands down....100% beeswax, they last forever and smell delicious! www.lfrankjewelry.com/ 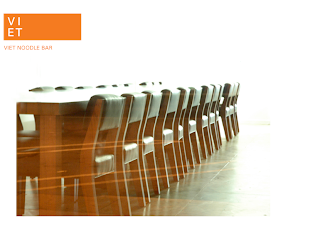 Had an awesome meeting & lunch with Deana of GreenwithGlamour - definitely check out all the great products this website has to offer. We dined @ Viet Noodle Bar...yum, yum, yum and they make a mean iced tea!
Viet Noodle Bar - 3133 Glendale BlvdLos Angeles, CA 90036(323) 906-1575 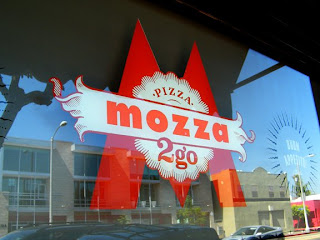 http://www.mozza2go.com/ I stopped in the cute little shop yesterday, didn't pick up anything but I love the idea of calling ahead and picking up food en route to the Holllywood Bowl.....

Come on, it's the time to join if you haven't already. If you even listen to KCRW once a month, in the car, on the web, whatever please give back. Besides, between the membership card and your premium you are making a profit - call or go to http://www.kcrw.com/ 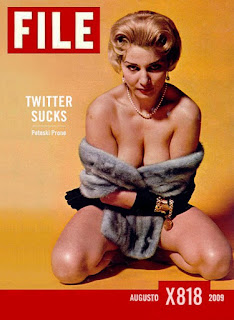 and http://www.thisisnthappiness.com/ is MAJOR!
(image taken from site) 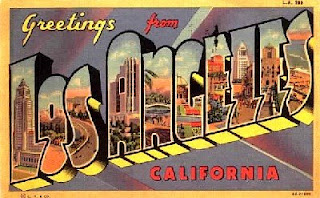 The Vena Cava designers have a blog http://vivavenacava.blogspot.com/....the most recent entry is their list of things to do in LA this week on their visit - I started looking a the list for accuracy (just kidding) but seriously that list is long don't know if you could get it all done in a week or even two for that matter.

and via photo!! A loup de charmant dress which I think I can purchase via http://trunkshow.bigcartel.com/ still not sure about that part

who knew Stiff Soled Shoes - my post about my hiking boots back when I broke my foot would be sooooo popular. Seriously - that post gets more hits than possibly all the others combined???? WTF