Happy Holidays and New Years to All!!!

I will be traveling for the holidays so I don't know if any attention will come to the blog til next year!! See you then!

Seems Nancy Botwin (Weeds) might have even more competition...from the NY Times Mag (The 7th Annual Year of Ideas Ish)
MARIJUANA MANSIONS - Marijuana growers have long faced a dilemma. If they grow pot outdoors, weather conditions are unpredictable, and plants can be spotted from the air or accidentally discovered. Yet if they set up an indoor operation in a sleepy town, their suspicious activity tends to draw attention. The new and counterintuitive solution of some growers in California is to move into a busy, upscale suburban neighborhood and establish a ''marijuana mansion,'' as the street-life magazine Don Diva recently termed it.
A home that costs a half-million dollars or more is essentially converted into a weed factory: rooms are packed with hydroponically grown plants; fans and air ducts are installed for moisture control and to remove the skunky odor; the electricity box is rewired to steal electricity from power lines. With precision light and temperature control, the growers, who don't live in the houses but check in a few times a week, can harvest more (and more potent) pot.
According to Lt. Greg Garland of the sheriff's department in San Bernardino County, where more than 50 pot houses have been raided this year, the growers favor newer communities in outlying suburbs because they get more space for the money, and residents pay scant attention to their neighbors. ''In these communities, both the husband and wife work; they're busy coming and going,'' Garland says. ''One man we spoke to lived next to a grower for a year and wasn't even sure what color the guy's car was.''
Curiously, the subprime mortgage fiasco helped make the phenomenon possible: many pot houses were purchased by first-time homeowners using interest-only loans, and with speculators buying houses to flip them, it wasn't uncommon for a home to sit empty for months. Authorities have started to alert the public to the signs of a pot house, a telltale one being a dry lawn. But, ever adaptive, the growers are hiring gardeners -- just like their suburban neighbors. STEVEN KURUTZ

I am not prego but I can't seem to stop eating (or talking - always happens when I find something I like!!!) about Bubbies Bread & Butter Chips. In less than 24, I have definitely devoured over half of this giant jar!

God, I am such the sucker for packaging!!! Jose-organic Teas are the latest to win the title, simple, bold and elegant. 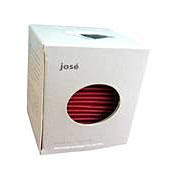 This is such a disorder!!!! So much so, that no matter how many times I've tried to buy the box I just can't bring myself to purchase the hometown fav and legend Celestial Seasonings. Yuck!

Feeling the need for the Assspen Montage!!!!!

For whatever reason there has been a lot of chatter about Aspen in the past 24. KP (bastard) is on his way up and AM and I are thinking about a trip. If you are looking to waste some more time today...you must watch the South Park Aspen Breakdancing clip too!!

...From Ecorazzi.com...Entourage star Adrian Grenier has closed on a series for a new eco-show on Discovery Channel’s upcoming network Planet Green. Tentatively titled The Green Life, the show will have green experts from different fields go out and help single home families, small businesses, college dorms, and film/tv sets green their “living” spaces. Planet Green is expected to kick off sometime in June of 2008.

Stay tuned as I may have some interesting news in relation to this story!!!

HAVE A GREAT WEEKEND!

I know you don't read my blog, but to the kindest man who braved the snow and cold last night to change my blown out tire!! I can't thank you enough!!! He saved me from waiting for an hour++ in the cold.

Yesterday I was chatting with JT, the founder of Re:volve Brand, about some projects he has in the works. He has some amazing plans in the hopper!! Being the nosey that I am, after our convo. I had to visit the site to check out the current line. Here's my winner. Click here to shop for yourself!!!

French is not one of the languages I studied. Those would be Italian, Spanish or Portuguese. But when I received the email blast in French from De La MJC or lamjc.com and saw the photos from the exhibit, From Rio to Hong Kong" Terry Richardson. Understanding the words wasn't that important, see for yourself... 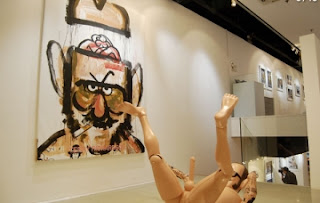 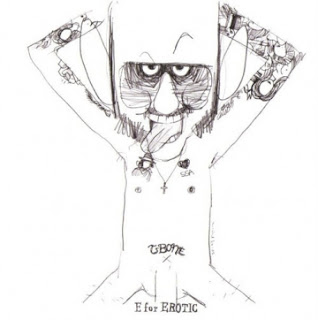 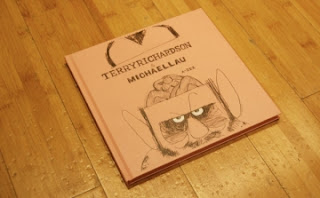 And if you are not familiar with Terry Richardson he is a photographer famous for campaigns from American Apparel to Belvedere Vodka.

I found these cool stencils by Little Girl Lost on Redbubble but you can find more of her work on Flickr. Click here to jump to the entire collection. 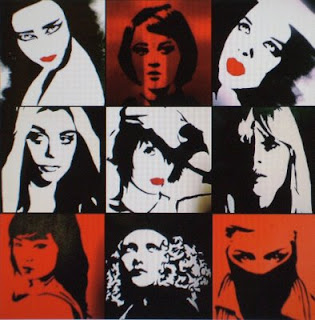 I also received word my friend, and amazing jeweler Dara sent some pieces out for me from LA. They are from her new line where she takes old bullets and melts them down to make fabulous new necklaces, pendants and bracelets. Soo excited, I am heading over to collect this afternoon. But you can click here to see all of her goodies right now !!!

Welcome to the endless painful forecast, while some revel in it. I am OVER it! I can't remember the last time I saw pavement. What happened to sunny Boulder? It's more like Fargo, ND. The cold makes me crave hot beverages and then there is my never ending sugar craving. To kill two birds with one stone, I am heating and downing this Pepperminty Chocolaty Beverage from Vitasoy. Since the work day is done, I need to spike it with some Baileys or Vodka! 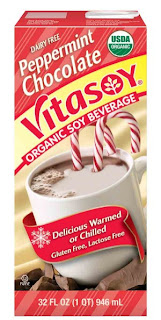 I have loved, studied and been fascinated by Andy Warhol for decades...I had the fortune of visiting his retrospective at the Guggenheim in Venice, Italy. Not that it has anything to do with anything but he always amuses me. I recently read this quote from dear old Andy...Buying is more American than thinking...ever so accurate, especially this time of year. 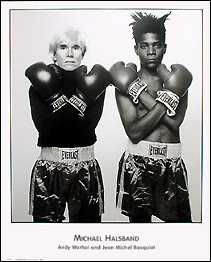 This is Andy with Basquiat. If you haven't seen Basquiat directed by Julian S., you should!!

If you haven't checked the news in the past 24 then you are probably unaware of the pair of shootings in Colorado Saturday morning into Sunday. Both occurred at 'unique' religious facilities and while I am not diminishing the tragedy of those killed, the news immediately brought to mind the film Jesus Camp...

..the weather is dreary, cold, damp, grey and altogether uninspiring for me. But the crazies I know who live for the snow are psyched. The hills are getting pounded. We are talking FEET!! I know its tempting but stay out of the bc and/or don't duck the ropes!!! Its prime avie conditions and the season is just getting started. There will be plenty of pow pow to come. Be patient! 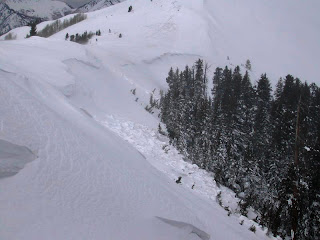 Have a great weekend however yours plays out!!!

If you live in LA swing by Avita Style/Avita Co-op Holiday Bash Tonight!! Paige Premium Denim will be Launching their Eco Denim Line!! Plus lots of other Great clothing and accessories. 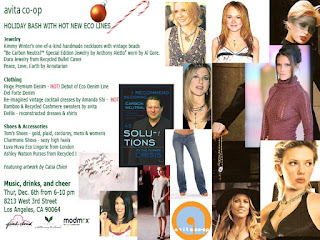 I took a yoga class this morning. 9a so that = me + all the Yummy Mummies, MILFs or whatever you want to call them . As I watched the ladies enter the room I was surprised at how many use the club's mats. I think those things are Giant Petri dishes - Gross! Plus these women have $$ to burn - don't get it???? When I started practiced a few years ago, my first investment was a Jade Yoga Mat. Its nice and cushy but at the same time has zero slip factor. Its worthy of lots of stars in my book.... 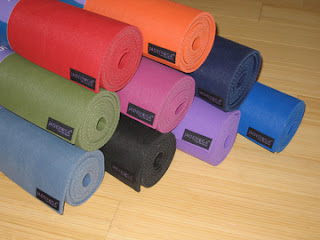 Inhabit makes absolutely wonderful, yummy cashmere and cotton sweaters. They are having an online sample sale - steals and deals!! Cashmere cardies for under $60 is an amazing deal. I have done my damage so click on the photo and have your turn at it!!! 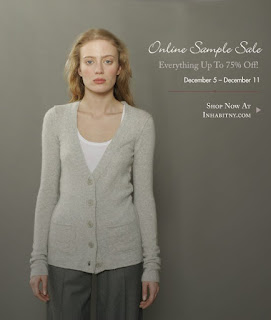 Ashley of Ashley Watson sent over photos of her Spring Collection. Made from reclaimed Leather Jackets, not only are the bags virtually one of a kind, at an amazing price point but she is doing her part to help reduce landfill waste.

Her bags and wallets have appeared in Lucky Magazine and on the Today Show recently....keep an eye out for this chica! Here are a couple of the new designs... 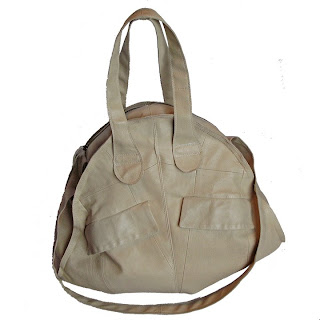 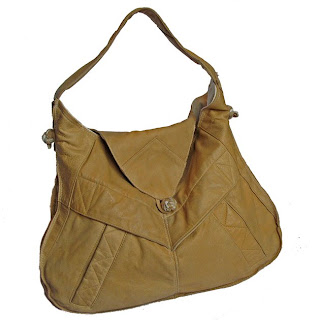 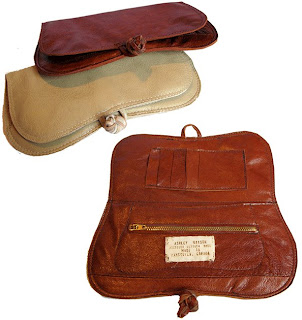 Call them whatever you want but the winds have been HOWLING here for the past 24 and it's made things crazy to say the least....I lost (and found thankfully) my dog today among other wacky adventures.
On a side note, while holiday shopping over the weekend I revisited Tarina Tarantino's collection. It's been years and I was pleasantly surprised to see how the line has evolved over time. Here are a couple of items that caught my eye. Jump on over to her site and see what strikes your fancy.... 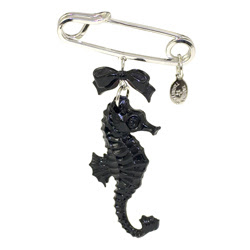 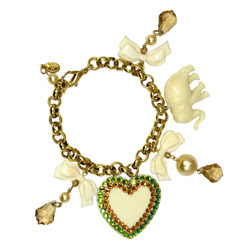 Only in Boulder Part Deux 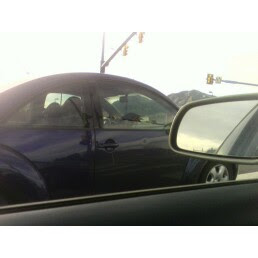 A new edition to my 'Only in Boulder' (previous-monk riding bike with Crocs). En route to a meeting this morning I stop at the light. I look at the car next to me to see this lady has a parrot for her traveling companion. Hard to tell but look closely at the passenger seat!!!

Check out the sweet designs by Boulder Artist Lisa Smith - click here to see her whole collection on Etsy.com 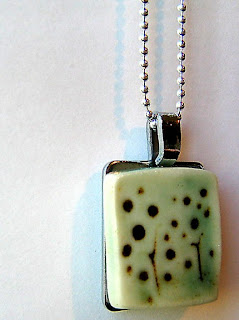 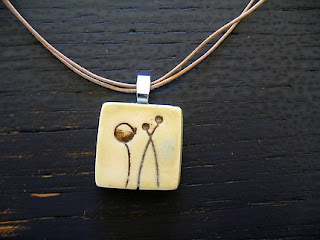 For whatever reason this week brought an influx of packages to my doorstep. Two of the most notable were Crummy Bros Organic Cookies & ModMix Organic Cocktail Mixers, it's been a dangerous yet delicious combination! I must admit ALL of the cookies have been sampled but the cocktails are going a bit slower...Both make great hostess gifts or treats for all the upcoming holiday parties. Run out and grab some to taste for yourself! 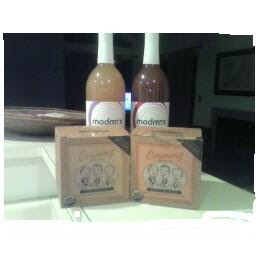